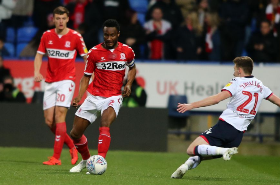 Chelsea hero John Obi Mikel is on the radar of Championship promotion hopefuls West Brom in the summer transfer window, according to reports.
Sky Sports says the Baggies are exploring the possibility of signing the former Nigeria captain who is a free agent after mutually terminating his contract with Trabzonspor in March over coronavirus concerns.
Mikel was in excellent form before parting company with the Turkish Super Lig side, making 27 appearances in all competitions, including five in the Europa League and qualifiers.
The 33-year-old had a spell in England with Middlesbrough during the second half of the 2018-2019 season, captaining the club in their last six matches in the Championship.
Over the course of his ten and a half seasons with Chelsea, the central midfielder won the Champions League, Europa League, Premier League, FA Cup, League Cup and Community Shield.
Six games to the end of the regular season, West Brom are in contention to earn an automatic promotion spot as they currently occupy the second position in the standings.
Ifeanyi Emmanuel
Photo Credit : mfc.co.uk
Copyright ANS