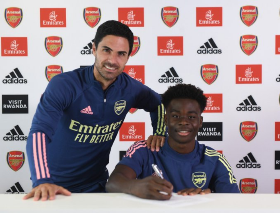 Arsenal technical director Edu is delighted to secure the long-term future of Anglo-Nigerian teenager Bukayo Saka.
The England U19 international has played a key role for Arsenal in their late push for a European spot, making 21 appearances in the Premier League and four in the FA Cup this season.
And he has shown his versatility by playing in multiple positions on the pitch, including left-back, left winger, left midfielder and left wing-back.
Still only 18, Saka was gradually introduced into the squad before establishing himself as a first-team regular.
"Bukayo came through the academy and I think we did the right process with him - 100 per cent right," said Edu to Arsenal's official webpage, arsenal.com.
"So he started with the first team just training, then he came into training even more, then started to be on the bench, then started to play 15 minutes, 20 minutes of games, then he became a very important player for the squad.
"So the process with him was brilliant. This process is the one we are working really hard on in the club to get it even more with the players.
"So that's very important for everybody and to send a message to everybody about the way we are working."
Saka will look to continue his brilliant form for Arsenal when they take on Wolverhampton Wanderers at the Molineux Stadium this evening.
Ifeanyi Emmanuel
Photo Credit : arsenal.com
Copyright ANS