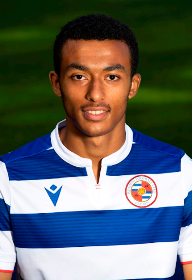 Championship club Reading have confirmed through their official website that Femi Azeez has signed a contract extension with the Royals.
Signed from non-league club Wealdstone FC in September 2019, Azeez's initial deal with Reading expired at the end of last month but he will now remain at the Madejski Stadium until at least June 2021, having inked a fresh one-year deal.
A member of Reading U23s in the curtailed academy season, Femi is the elder brother of the popular Arsenal youth-teamer Miguel Azeez, who has been tipped to make his professional debut in the upcoming season.
A winger by trade, Femi Azeez appeared in eight matches in the Premier League 2 in his debut season with Reading and was in action for 423 minutes.
Meanwhile, promising defender Akin Odimayo will be moving onto pastures new following his release by Reading.
The 1999-born player departs after playing one match for the first team, against Plymouth in the second round of the League Cup back in August.
As previously reported, Liverpool loanee Ovie Ejaria and Gabriel Osho have signed short-term contract extensions to enable them represent Reading's first team until the end of the protracted campaign.
Igho Kingsley
Photo Credit : readingfc.co.uk
Copyright ANS