...the complete Nigerian football portal
Subscribe
'Could Be The Most Important Goal of Leicester's Season' - Ex-Barcelona Striker On Iheanacho's Opener Vs Eagles
Published: July 04, 2020 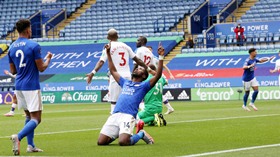 Barcelona hero and legendary England striker Gary Lineker is of the opinion that Kelechi Iheanacho netted the most important goal of the 2019-2020 season for Leicester City in their 3-0 rout of Crystal Palace at the King Power Stadium on Saturday afternoon.
Prior to today's clash against The Eagles, the Foxes were without a win in four consecutive matches in all competitions since the resumption of the season last month.
Anything other than a victory today would have seen Leicester City's Champions League aspirations hanging on a thread, bearing it in mind that they have games against Arsenal, Sheffield United, Tottenham Hotspur and Manchester United still to come.
Brendan Rodgers' side got the best possible platform to claim all three points and keep alive their hopes of a Champions League spot when Iheanacho tapped in to open the scoring three minutes after the restart, before Jamie Vardy's brace.
"That could be the most important goal of @LCFC’s season from @67Kelechi. Get in!'' tweeted Lineker shortly after Iheanacho broke the deadlock.
Iheanacho's second half strike took his tally for the season to 10 goals in all competitions, with half of the goals coming in the English top-flight.
Ifeanyi Emmanuel
Photo Credit : lcfc.com