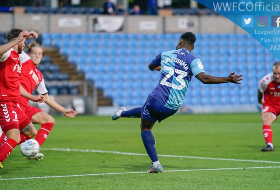 Wycombe Wanderers have sealed their passage to Wembley, where they will contest the League One playoff final with Oxford United following their 6-3 aggregate win against Fleetwood Town on Monday, allnigeriasoccer.com reports.
Two goals from Nigerian winger Fred Onyedinma helped the Chairboys salvage a draw on the night.
In terms of team news, the Lagos-born youngster and Flying Eagles midfielder Nnamdi Ofoborh started for the home team while experienced striker Adebayo Akinfenwa entered the game as a substitute in the 46th minute.
Wycombe Wanderers held a 4-1 aggregate advantage going into the game at Adams Park and two minutes into the second half, Onyedinma put them in a good position when he equalised to make it 1-1 on the night.
The 23-year-old restored Wycombe's three-goal lead on aggregate when he slotted under the goalkeeper, before grabbing his brace in the fourth minute of stoppage time.
With his two goals against Fleetwood Town, Onyedinma took his tally for the season to six goals from 16 games in all competitions.
He played on the same team, Blackheath district, as Everton winger Alex Iwobi in his formative years as a footballer prior to his move to Millwall.
Wycombe Wanderers will face Oxford United in the League 1 playoff final on Monday 13th July, starting from 1930 hours.
Igho Kingsley
Photo Credit : wwfc.com
Copyright ANS