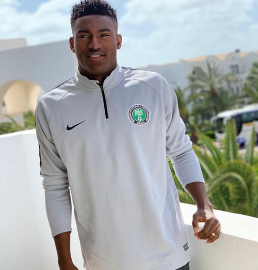 Mainz 05 sporting director Rouven Schröder has confirmed that 2013 U17 World Cup-winning striker Taiwo Awoniyi has returned to his parent club Liverpool following the conclusion of the 2019-2020 season.
Mainz have a realistic chance of loaning the Nigeria U23 international for another season as he is not eligible to represent The Reds in the Premier League because of a work permit hurdle.
Awoniyi is contracted to the Premier League champions until June 2023 and assuming his paperwork was in place, he would be behind Mohamed Salah, Sadio Mane and Roberto Firmino in Jurgen Klopp's pecking order of strikers.
"He went back to Liverpool on July 1st, and we can imagine that things will continue for us under certain parameters," said Schröder to Kicker.
The 22-year-old Awoniyi previously enjoyed loan spells at FSV Frankfurt, NEC, Royal Excel Mouscron and KAA Gent, before joining Mainz on a season-long loan last August.
He made twelve appearances for the Zerofivers in the Bundesliga in the recently concluded season, scoring one goal against FC Cologne.
Igho Kingsley
Copyright ANS