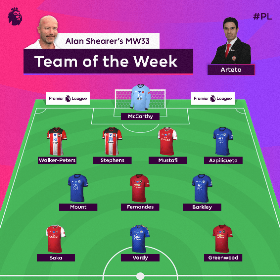 Bukayo Saka has been included in the latest English Premier League Team of the Week selected by the all-time top scorer in Premier League history, Alan Shearer.
The Hale End Academy product enhanced his growing reputation after getting on the scoresheet as Arsenal ran out 2-0 winners against a strong Wolverhampton Wanderers side.
Saka was on the right of a three-man attack, with Leicester City's Jamie Vardy the center forward and Manchester United teenager Mason Greenwood deployed on the left.
The 18-year-old Nigeria-eligible player celebrated inking a new contract when he opened the scoring with a smashing finish 43 minutes into the contest at the Molineux Stadium.
The game against Wolves was his 34th appearance of the season in all competitions, with 22 in the Premier League of which 16 were starts.
Saka and his Arsenal teammates will face Leicester City at the Emirates Stadium on Tuesday evening.
Igho Kingsley
Copyright ANS