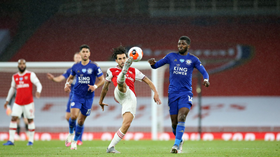 In the race for the UEFA Champions League spots, Arsenal failed to make up the ground they craved after following their 1-1 draw with Leicester City at the Emirates Stadium on Tuesday night.
In terms of team news, the three Nigeria-eligible players expected to be on parade were all in action, with Bukayo Saka starting for the Gunners and Super Eagles duo Kelechi Iheanacho and Wilfred Ndidi named in the Foxes starting XI.
Pierre-Emerick Aubameyang's 21st minute strike, assisted by a teenager with a Midas touch Saka, proved the difference at the interval, but Jamie Vardy's late goal ensured it finished honours even.
At minute 34, Iheanacho had the ball in the back of the net but it was disallowed after a VAR review, the striker was adjudged to have fouled Sead Kolasinac in the build-up to the goal.
Former Liverpool and Leicester City striker Emile Heskey thinks the goal should have stood because the big Bosnian left-back ran into the Nigerian first.
Speaking on Premier League Productions at half-time, Heskey stated : "When you actually look closely, the foul was actually on Iheanacho first, running into him and then obviously he does not need to swing his arm out.

"A lot of time, that's your first instinct when someone does this but it's a great cross from Vardy. "
The lively Iheanacho, who scored in back-to-back games before Leicester's visit to the English capital, made way for Harvey Barnes just before the hour mark.
Ifeanyi Emmanuel
Photo Credit : lcfc.com
Copyright ANS