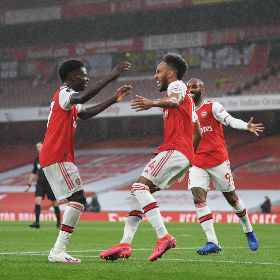 Only captain Pierre-Emerick Aubameyang has contributed to more goals for Arsenal than Bukayo Saka this season.
The Hale End Academy product has now racked up twelve assists in all competitions after he set up the Gabonese striker to score his 20th Premier League goal of the season with a brilliant cross in a 1-1 draw with Leicester City on Tuesday night.
Leicester City got back into the game courtesy of Jamie Vardy's 84th minute strike after Edward Nketiah was sent off shortly after coming on as a substitute.
The England U21 international, who was on the pitch for 100 seconds and didn't touch the ball, was yellow carded on-field by referee Chris Kavanagh for a foul on James Justin but the card was upgraded to red after a VAR review.
On punditry duties with Premier League Productions, Arsenal legend Ian Wright praised Saka for his actions in the build-up to the opening goal of the game.
"It was a brilliant goal. Daniel Ceballos, as I was talking about him before the start of the game - about trying to get the ball forward when you can," Wright said.
"Saka's movement was magnificent and the way he stops Johnny Evans and moves in was brilliant.

"And that's what Arsenal are capable of, when they're moving the ball quickly.

"Both Soyuncu and Evans are both in positions you don't want them, Soyuncu is over-committing himself, didn't judge the ball.
"Johnny Evans now is in trouble because he's been stood up, great skills from Saka to stop him and move in quickly because he's an older player.

"And then the pass into Aubameyang was perfect, it was a brilliant goal."
A win against the Foxes would have taken Arsenal to 52 points for the season, three behind fifth-placed Manchester United, ahead of Sunday's big clash against North London rivals Tottenham Hotspur.
Ifeanyi Emmanuel
Photo Credit : arsenal.com
Copyright ANS