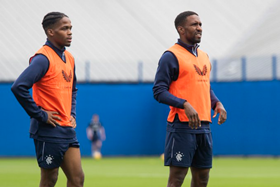 Scottish Premiership side Glasgow Rangers started full contact training this week ahead of the start of the upcoming season, allnigeriasoccer.com reports.
Liverpool icon Steven Gerrard has been observing three Nigeria-eligible youngsters in the shape of Super Eagles midfielder Joe Aribo, Italian-born fullback Calvin Bassey and Scotland U19 sensation Dapo Awokoya-Mebude at the Rangers Training Center.
Aribo made an astonishing 48 appearances for Rangers last term, with 14 coming in European competitions.
The former Charlton Athletic midfielder quickly adapted to life in Scotland and his performances in the early part of the 2019-2020 season saw him earn a maiden call-up to the Super Eagles for an international friendly vs Ukraine.
Rated one of the most promising young defenders of Nigerian descent in Britain, Bassey completed his move to Rangers at the start of this month and is in line to make his professional debut in the new season.
Training with the first team of a big club won't be something new to him as he did so on multiple occasions during his spell with former Premier League champions Leicester City.
Tricky and pacy winger Mebude, 18, has been on the periphery of the first team squad and made his senior debut against Kilmarnock in May 2019.
He has been registered by Rangers for the knockout rounds of the 2019-2020 Europa League.
Ifeanyi Emmanuel
Photo Credit : twitter.com/DMebude
Copyright ANS