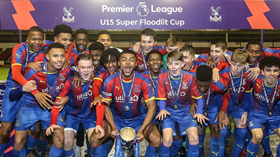 Crystal Palace have officially announced their new intake of Academy scholars for the 2020-2021 season, allnigeriasoccer.com reports.
Of the fifteen young academy prospects awarded fresh two-year contracts, three players namely Victor Akinwale, Omotayo Adaramola and Ademola Ola-Adebomi are eligible to represent the Nigerian national teams.
The three teenagers were key members of the Eagles U15 side that won the Premier League Floodlit Cup in 2019.
Akinwale has been described as a striker who is dynamic, powerful, good in hold-up play and a good finisher.
On the back of his outstanding performances for Palace youth teams, he was handed a call-up to attend an England U16 training camp a year ago.
Left-back Adaramola is provisionally cap-tied to the Republic of Ireland after making his competitive debut for the U17s in a European Championship qualifier against Andorra in November 2019.
Ola-Adebomi is a big, powerful, fast and left-footed striker who models his game after former Manchester United star Romelu Lukaku.
London-born Ola-Adebomi, who joined Palace at the age of eight, is willing to play for Nigeria's youth teams.
Ifeanyi Emmanuel
Photo Credit : cpfc.co.uk
Copyright ANS