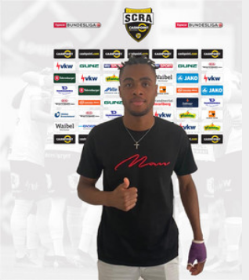 Austrian Bundesliga club SC Rheindorf Altach have officially announced the signing of Austrian left-back of Nigerian descent Nosa Edokpolor on undisclosed terms.
Aged 23, Benin City born Edokpolor is joining SC Rheindorf Altach from another Austrian club, Second League FC Blau-Weiß Linz, whom he joined two years ago from SV Horn.
The defender and two other summer signings in 24-year-olds Tino Casali and Mario Stefel were unveiled by the club on Friday.
"The SCR Altach took great care of me and showed me a way with which I can fully identify. I have been working for a long time to play in the Bundesliga and I am happy that I can now take this step," said Nosa.
"Altach is a club with a clear game philosophy and a highly professional environment, where you can develop very well as a young player."
On his curriculum vitae, Edokpolor lists FC St. Veit, Wolfsberger AC and Palermo in Italy among his previous employers.
One-time Nigeria Football Federation target Sidney Sam, who is cap-tied to Germany, wore the colours of SC Rheindorf Altach in the recently concluded season.
Ifeanyi Emmanuel
Photo Credit : scra.at
Copyright ANS