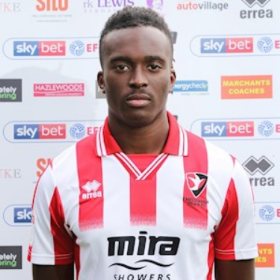 Former Chelsea defender Josh Debayo has turned down the chance to extend his contract with Cheltenham Town, the EFL League Two club have informed through their official website.
Thus, the 23-year-old can join a foreign club as a free agent in the summer transfer window, but Cheltenham Town will be entitled to receive compensation if he moves to another team in England because he is under the age of 24.
The ex-Golden Eaglets invitee was offered fresh terms after the club lost to Northampton Town in the semifinals of the League Two playoffs.
Debayo was an unused substitute in both games and would have taken his total appearances to 18 in all competitions  for Cheltenham Town if he had featured against the Cobblers.
He was loaned out to non-league club Dover Athletic for a portion of the 2018-19 campaign and went on to play 16 games in the National League, including 15 starts.
Before moving to Cheltenham Town in July 2018, he wore the colours of the youth teams of Fulham, Chelsea, Southampton and Leicester City.
Igho Kingsley
Photo Credit : ctfc.com
Copyright ANS