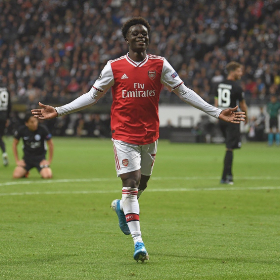 England manager Gareth Southgate will monitor Anglo-Nigerian winger Bukayo Saka at close quarters when Arsenal face off with Manchester City in the semifinal of the FA Cup on Saturday, July 18.
According to the Daily Mail, Southgate has been given the green light by the English Football Association to attend the semifinal matches involving Manchester City, Manchester United, Chelsea and Arsenal.
The Three Lions boss' first scouting mission post lockdown is to run the rule over the exciting young talents in the ranks of the Manchester and London clubs, including Saka, Mason Greenwood and Phil Foden.
Should Saka catch the eye of Southgate, he stands a good chance of being invited to the England squad for their UEFA Nations League matches against Iceland and Denmark.
The Hale End Academy product is a target for the Nigeria Football Federation, with President Amaju Pinnick likening the teenager to a goldfish with no hiding place.
Gernot Rohr's scout in London, Tunde Adelakun has been keeping tabs on Saka since he broke into the Arsenal first team with a view to a call-up to the Super Eagles if he switches his allegiance from England to Nigeria.
The 18-year-old became provisionally cap-tied to his country of birth at the European U17 Championship two years ago and also has caps for the Young Lions at U16, U18 and U19 levels.
Last year, the English Football Association beat their Nigerian counterparts to the services of Chelsea duo Tammy Abraham and Fikayo Tomori, who were both extensively courted by Pinnick before they became cap-tied to the Three Lions.
Ifeanyi Emmanuel
Photo Credit : arsenal.com
Copyright ANS