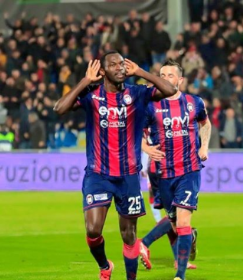 Simeon Tochukwu Nwankwo continued his rich vein of form by getting on the scoresheet as Crotone ran out 3-1 winners in a Serie B fixture against Cittadella at the Stadio Pier Cesare Tombolato on Friday night, allnigeriasoccer.com reports.
A week after the Super Eagles striker netted his first professional hat-trick, he took his tally for the season to 18 goals in all competitions when he found the net in the 37th minute vs Cittadella.
Simy is now two strikes away from matching his personal record for goals scored in a single season - the 20 he netted in his final season in Portugal with Gil Vicente FC.
He is in contention for the Golden Boot award in the Italian second-tier as he was one goal behind leading scorers Pietro Iemmello (Perugia) and Stefano Pettinari (Trapani ) heading into game week 33.
Ever since Simy signed for Crotone, he has scored an impressive 43 goals, more than for any other team since moving to Europe in August 2010.
August 21, 2020 will make it four years since he first played in the Serie A, and he could be returning to the top-flight next season, with Crotone occupying the second position in the table five matches to the end of the regular season.
Ifeanyi Emmanuel
Copyright ANS