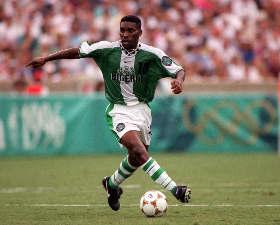 Former Newcastle United and Aston Villa right-back Habib Beye believes Austin Okocha was almost on the same level as Barcelona and Brazil icon Ronaldinho in terms of talent during their playing days.
The retired Senegal international is of the opinion that Okocha did not win the Ballon d'Or because he did not play for a top club with the exception of Paris Saint-Germain.
Okocha and Ronaldinho were once teammates at PSG before the Brazilian moved to European giants Barcelona, where he won the FIFA World Player of the Year awards twice in 2004 and 2005 and was a Ballon d'Or winner in 2005.
As for the former Super Eagles captain, he played for Bolton Wanderers, Qatar SC and Hull City after leaving PSG.
"Okocha is one of the great players who have not been able to play in big clubs," Beye said on Team sur Canal Plus via afriquesports.net.
"Ronaldinho could have had two to four Ballons d’or. Jay Jay Okocha is such a talent and could have been too."
Okocha was a leading figure for Nigeria at the 1994, 1998 and 2002 World Cups and played in two Africa Cup of Nations finals in 1994 and 2000.
Igho Kingsley
Photo Credit : fifa.com
Copyright ANS