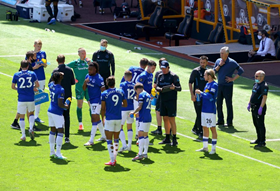 Everton's European hopes suffered a major blow after they were thrashed 3-0 by Wolverhampon Wanderers in a Premier League clash at Molineux Stadium on Sunday afternoon, allnigeriasoccer.com reports.
Raul Jimenez from the spot set Wolves on their way two minutes before halftime, Leander Dendoncker added a second shortly after the restart before an emphatic finish from Diogo Jota sealed the win with 16 minutes left on the clock.
Super Eagles playmaker Alex Iwobi paid the price for his not too convincing performances since the season restarted with manager Carlo Ancelotti  dropping him to the bench for the first time in six matches.
The Hale End Academy product entered the pitch as a substitute to replace his former Arsenal teammate Theo Walcott on 56 minutes and with Everton trailing 2-0.
It was Iwobi's 124th appearance in the English Premier League since making his debut, something which his uncle Austin Jay-Jay Okocha achieved in his final game with Bolton Wanderers on May 7, 2006.
Okocha and Iwobi's Premier League appearances have been surpassed by only ten Nigerian players namely Shola Ameobi, Nwankwo Kanu, Yakubu Aiyegbeni, Mikel Obi, Joseph Yobo, Victor Moses, Victor Anichebe, Celestine Babayaro, Efan Ekoku and Peter Odemwingie.
Ifeanyi Emmanuel
Photo Credit : evertonfc.com
Copyright ANS