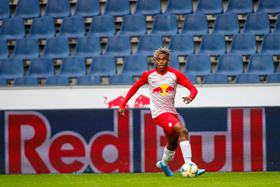 Nigerian-born Austria U19 international Chukwubuike Adamu continued his fine form in front of goal by scoring a brace as Red Bull Salzburg's feeder team, FC Liefering were held to a 2-2 draw by Ried on game week 27 in the Austrian 2. Liga on Sunday, allnigeriasoccer.com reports.
Adamu broke the deadlock after 13 minutes as he kept his cool to convert a penalty awarded after Csaba Bukta was brought down in the area.
Six minutes after the restart, the Austrian-Nigerian made it 2-0 Liefering as he fired into the net via the crossbar.
But Ried did not give up though as two penalties converted by Marco Grull and Jefté Betancor in the 75th and 81st minute respectively saw them earn a share of the spoils.
Adamu has registered his name on the scoresheet 17 times for Red Bull Salzburg's teams so far this season - 14 for Liefering in the 2. Liga and 3 in the UEFA Youth League for Red Bull Salzburg U19s.
The 19-year-old has also impressed at international level, netting in each of his last three appearances for Austria in the European U19 Championship qualifiers.
Igho Kingsley
Photo Credit : fc-liefering.at
Copyright ANS