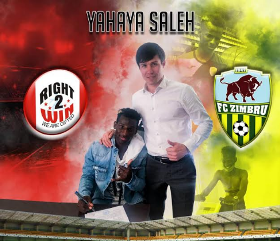 Saleh Yahaya has joined Moldovan Divizia Națională side FC  Zimbru from Right2Win Sports Academy, the Nigerian club have announced through a press release.
Yahaya has put pen to paper and will begin his sojourn outside the shores of Nigeria with the Moldovan top-flight side.

The player joined Right2Win Academy from Galadima Academy and has been one of the revelations of the Abia State based football talent hub.

Zimbru FC have a rich history in participating in European competitions, they featured in the qualifying round of the  the UEFA Europa League in the 2016-17 season.

They also featured in the qualifying round of the UEFA Champions League in the 2000/2001 season and finished 7th in the last Moldovan league season.


In his words "Saleh Yahaya proved himself and I'm glad this opportunity came and he grabbed it, it is an attestation that we keep doing the right things and I obviously believe that more of our boys will get lucrative deals outside Nigeria.
"I must also give kudos to Alhaji Abubakar Ibrahim Galadima, the owner of Galadima academy, he was instrumental right from day one and thank God it worked out well, special appreciation to our partner and principal Officer of Myron Topclass Sport Outfits, Mr Eddie Iseri Ogbemudia, he is always ensuring that the right things are done when contract talks come to the fore and once again he proved why he's a top Nigerian football intermediary"
The Right2Win Academy President urged Saleh Yahaya to keep the flag flying in his new abode and also be a good ambassador of Right2Win Sports Academy as well as Nigeria as a whole.