Subscribe
Arsenal Icon Reveals Who Is To Blame For Penalty Conceded By Leicester And It's Not Ndidi
Published: July 12, 2020 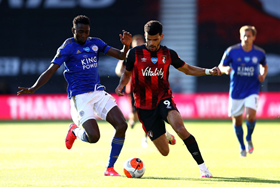 Relegation-threatened Bournemouth came from behind to win a Premier League game for the first time in two years, thrashing Leicester City 4-1 at the Vitality Stadium on Sunday evening.
While Wilfred Ndidi and Kelechi Iheanacho started for The Foxes, Dominic Solanke was included in the Cherries starting lineup and was joined on the pitch by teammate Philip Billing in the 46th minute.
In an extraordinary match, Bournemouth found themselves one down at halftime, after the league's top scorer Jamie Vardy netted his 23rd of the season in the 23rd minute.
Leicester City paid for their sloppiness in the second half, with Solanke netting his first Premier League goals, an own goal from Johnny Evans and Junior Stanislas converting from the spot to secure a win for Bournemouth.
Speaking post-match, Arsenal legend Ian Wright put the blame on goalkeeper Kasper Schmeichel for the penalty conceded by Leicester City in the 66th minute, saying the Denmark international was nonchalant when he smashed the ball at Ndidi on the edge of his area.
Wright said on Premier League Productions, : "When you look at it from the other angle, where is he (Kasper Schmeichel) trying to hit that, over them, look at the striker.

"If he's trying to hit that over those two guys, it's the kind of mistake that for me is complacency, over-confidence. I think he has underestimated them."
Should Manchester United beat Southampton as expected on Monday evening, Leicester City's destiny won't be in their own hands again in the race for a Champions League spot, with three games to the end of the 2019-2020 season.
Ifeanyi Emmanuel
Photo Credit : afcb.co.uk
Copyright ANS
All rights reserved. This material, and other digital content on this website, may not be reproduced, published, rewritten or redistributed in whole or in part without prior express written permission from allnigeriasoccer.com