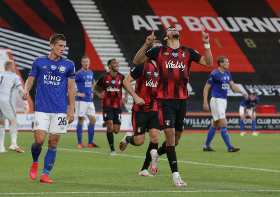 One-time Nigeria Football Federation target Dominic Solanke did a massive favour to his former club Chelsea by scoring his first Premier League goals for Bournemouth as they came from behind to shock Leicester City 4-1 at the Vitality Stadium on Sunday evening.
It's a result that favours Chelsea more than the Cherries as the Blues are guaranteed to remain in the Champions League positions regardless of the outcome of today's meeting between Manchester United and Southampton, while Eddie Howe's team cut the gap between them and Watford to three points.
The Golden Ball winner at the 2017 FIFA U20 World Cup has a past with Chelsea, spending thirteen years with the Stamford Bridge outfit before switching to Liverpool in 2017.
Speaking to Sky Sports on getting his first Premier League goals for Bournemouth at a crucial time, Solanke stated : "No. not really. I am just happy that they came now. In a time like this we need to get goals.
"As I said the last few games we haven't quite managed to get that but today the boys were on fire and were ready to go and managed to put four in."
Solanke's shot in the 67th minute made it across the line despite Schmeichel's attempted save to give Bournemouth a 2-1 lead, before he wrapped up the scoring with a well taken goal three minute from time.
The Bournemouth number 9 added : "I think of course with a goal you've got a lot of adrenaline and confidence. That first goal probably gave me the boost to get the second."
Solanke and his Cherries teammates meet another top four opposition in Manchester City in their next Premier League fixture at the Etihad Stadium on Wednesday, July 15.
Ifeanyi Emmanuel
Photo Credit : afcb.co.uk
Copyright ANS