...the complete Nigerian football portal
Subscribe
'It's Easier For Me To Be Super Eagles No.1' - Maduka Okoye's First Words After Sparta Rotterdam Move
Published: July 13, 2020 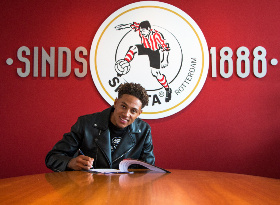 Dutch Eredivisie side Sparta Rotterdam have officially confirmed the signing of one-cap Nigeria international Maduka Okoye, who was on the books of German outfit Fortuna Düsseldorf in the recently concluded season.
Okoye has put pen to paper on a two-year deal with De Kasteelheren, with an option for another two seasons, subject to a medical examination.
The 20-year-old is currently behind Daniel Akpeyi, Francis Uzoho and Ikechukwu Ezenwa in Gernot Rohr's pecking order of goalkeepers but has targeted the Super Eagles number one position now that he has joined a top-flight club where he could feature for the first team.
In his first words after the deal was confirmed, Okoye told Sparta Rotterdam's official YouTube account when asked about his debut for the national team: "Crazy, big, important moment for myself. It's important for me to play here, it's easier for me to get the number one spot for Nigeria, so I'll put everything into it and give everything".
There were a lot of clubs interested in signing the Super Eagle but he chose to move to Sparta Rotterdam.
"I think that this is the right spot for me, for my future, for preparing the next step, a bigger step and I just can't wait to get started with the guys.
"I got in contact with Sparta two months ago. They told me their plans for me and everything sounds great and that's why I chose here because I feel it's the right place for me and I feel home already."
On his expectations for the 2020-2021 season, Okoye stated : I expect a lot for myself, I have to work hard, fight for the number one spot and give my best to help the team and myself."
Okoye, who remains eligible to represent Germany at international level, played for the youth team of Bayer Leverkusen prior to his move to Fortuna Dusseldorf in 2017.
Igho Kingsley
Photo Credit : sparta-rotterdam.nl
Copyright ANS