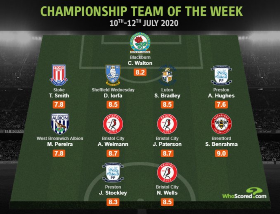 Dominic Iorfa, son of former Super Eagles striker with the same name, has been included in the latest Championship Team of the Week by football statistics website Whoscored.
A former England U21 international, Iorfa netted his second goal of the season to help Sheffield Wednesday register a 3-0 win against a Queens Park Rangers team with four Nigeria-eligible players in their starting lineup this past weekend.
In a 4-4-2 formation, the Anglo-Nigerian was partnered in central defence by Luton Town's Sonny Bradley.
Of the four defenders selected in the ceremonial best eleven in the second-tier, Iorfa was the joint top rated at 8.5.
The 25-year-old finished the match with a game-high four tackles and the five clearances he made was only bettered by teammate Tom Lees, who racked up six.
Iorfa won two aerial duels, completed fifty percent of his passes, and made one interception over the course of ninety minutes.
His last appearance in an England jersey was against Germany in the 2017 European U21 Championship.
Igho Kingsley
Copyright ANS