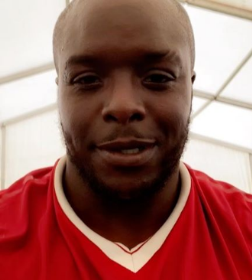 English Premier League-winning manager Jurgen Klopp has promised to invite Anglo-Nigerian striker Adebayo Akinfenwa to the Reds trophy parade.
A lifelong Liverpool fan, Akinfenwa's Wycombe Wanderers gained promotion to the Championship on Monday after beating Oxford United 2-1 in the playoff final at Wembley, with the physical striker entering the game as a substitute in the 62nd minute.
Shortly after the Anfield side won the title, Akinfenwa took his celebrations too far when he posted a video on social media wearing a Liverpool shirt, surrounded by his bemused Wycombe Wanderers teammates at the club's training ground.
And yesterday, Klopp brightened the night for the bulky center forward by sending him a message of congratulations after the Chairboys secured promotion.

Akinfenwa had asked the German coach to get in touch with him via WhatsApp and Klopp fulfilled the wish of the player.
Speaking to reporters on Tuesday ahead of the visit to Arsenal, Klopp stated : "He is invited for the parade! I saw before the video when he was sitting in the team meeting in an LFC kit, I thought that was really funny. He responded to the video, it was nice, he was really happy."
Akinfenwa's story will move you as four years ago he was unemployed after he was released by AFC Wimbledon.
Klopp added : "I just enjoy these kinds of stories [like Akinfenwa] and football meant everything to me before someone thought you can earn some money from it.
"You can fulfill your own dreams. For some teams it's early but others can do it if they work hard".
Akinfenwa was involved in 16 goals (10 goals, 6 assists) in 32 games in the regular season which helped Wycombe Wanderers reach the League One playoffs.
Igho Kingsley
Copyright ANS