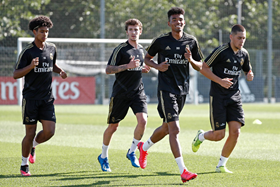 Nigerian attacking midfielder Marvin Akinlabi Park has been training with Real Madrid U19 team since Wednesday, allnigeriasoccer.com reports.
Real Madrid youth team players have started preparations for their UEFA Youth League round of sixteen clash against Juventus scheduled to hold on August 16 and Akinlabi is one of the overage players drafted into the squad.
For the 2019-2020 season, only players born on or after January 1, 2001 are eligible to participate in the UEFA Youth League, but up to five players born on or after 1 January 2000 may be included on the list provided certain conditions are fulfilled.
Born July 3, 2000, Akinlabi made three starts for Real Madrid in the first half of the 2019-2020 season in the UEFA Youth League against PSG and Galatasaray (2), taking his total appearances in the competition to 10 since his debut.
Should Real Madrid beat Juventus in the last 16, they will face the winner of the meeting between Inter Milan and Rennes in the quarterfinals.
Akinlabi and his Real Madrid U19 teammates are coached by legendary striker Raul.
The Swiss City Nyon will host the remainder of the UEFA Youth League.
Igho Kingsley
Copyright ANS