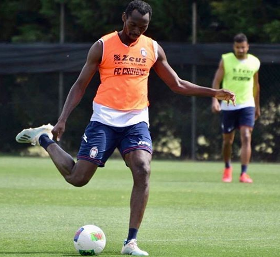 Super Eagles striker Simeon Tochukwu Nwankwo could finish the season with a new personal best for goals scored in a single campaign, and his Italian club Crotone are well placed to secure promotion back to the Serie A after two years of absence.
Three matches to the end of the regular season, Crotone are second in the table with 62 points and their Nigerian striker has played a key role, netting 18 of their 57 goals in the Serie B.
With an extra goal in the Coppa Italia, Simy has totaled 19 goals for the season, one less than his personal best of 20 which he achieved in his final season with Gil Vicente in Portugal.
"It is a continuous process, it's about the work because everything is about the process going on," Simy told allnigeriasoccer.com.

"The work we started maybe last season didn't go well but we didn't change anything, we continued working the same way, with the same belief.

"We know we have the chances, we have the quality, we are confident but sometimes in football you don't get what you want.

"Last season that was it, this season is different, we are close to our objective which is fine.

"My form, the form of the team is all down to consistency, hard work and belief. We have to be focused and don't let anything to distract us until we get it."
When Simy was asked to share his thoughts on Victor Osimhen's proposed move to Napoli, the lanky striker suggested that he would be in touch with his international teammate to offer him advice.
The Lille Player of the Year has also been linked with English Premier League clubs, including Tottenham Hotspur.
"If I have any advice for Victor, I'll do it personally, not something I'll be talking about in the media.

"Of course he is young but he's no longer a kid, he is an adult. He has been in Europe for a couple of years, he has been playing professionally, he can make the best decision for himself and I believe whichever decision that he makes will be for the betterment of his career and that of his life.

"I am very, very confident that he'll make a better choice and I am very happy for what is happening," concluded Simy.
The 28-year-old Simy was a member of the Super Eagles squad to the 2018 World Cup, making two appearances against Croatia and Argentina during the tournament in Russia.
Ifeanyi Emmanuel
Copyright ANS