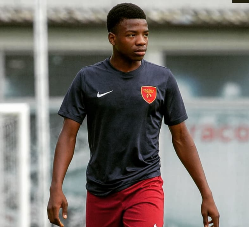 Wiesław Wilczyński, founder and owner of FCB Escola Varsovia Football Academy, has exclusively informed allnigeriasoccer.com that Ebenezer will change clubs in the summer transfer window, without going into further details.


Coach Manu Garba ran the rule over Ebenezer during the Nigeria U17s training camp in Abuja last year but he was not included in the country's final squad list for the tournament in Brazil because he had to return to Poland due to club commitments.
In December 2019, he trained with Polish Ekstraklasa side Lechia Gdańsk with a view to a transfer.
An attacking midfielder cum winger by trade, Ebenezer has admitted that he models his game after PSG and Brazil superstar Neymar.
Speaking to zzapolowy.com earlier this year, the 18-year-old said : "Neymar. I admire his skills, I always enjoy watching him. Probably no football player has such ease in handling the ball. Sometimes I imagine playing like him."
Ebenezer represented Barcelona Escola Varsovia Football Academy in the Centralna Liga Juniorów in the 2019-2020 season.
Ifeanyi Emmanuel
Copyright ANS
All rights reserved. This material, and other digital content on this website, may not be reproduced, published, rewritten or redistributed in whole or in part without prior express written permission from allnigeriasoccer.com