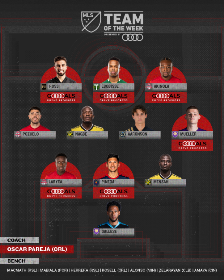 American-born striker of Nigerian descent, Ayo Akinola has been recognized again for his outstanding performances since the start of the MLS is Back Tournament, allnigeriasoccer.com reports.
For the second week running, the Toronto FC new kid on the block has been named to Major League Soccer's Team of the Week.
Akinola bagged his first career hat-trick as Toronto defeated Orji Okwonkwo's Montreal Impact 4-3 in a Canadian derby in round two of the MLS is Back Tournament and one of his strikes is in the running for the Goal of the Week.
Last week, the 20-year-old led the frontline in the TOTW, but slots in as a right winger in the latest ceremonial starting lineup containing the most outstanding players in the American top-flight.
Akinola's Toronto teammates Richie Laryea and Alejandro Pozuelo have also been selected in the Team of the Week.
Pozuelo set up the American-Nigerian twice against Montreal Impact, in the 25th and 37th minutes.
Igho Kingsley
Copyright ANS
All rights reserved. This material, and other digital content on this website, may not be reproduced, published, rewritten or redistributed in whole or in part without prior express written permission from allnigeriasoccer.com