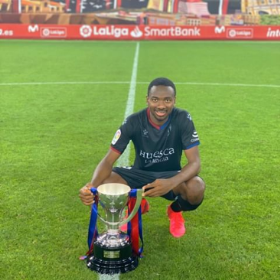 Former Arsenal midfielder Kelechi Nwakali is in celebration mood again after helping SD Huesca secure the La Liga 2 title in his first season with the club, allnigeriasoccer.com reports.
Barely four days ago, the ex-Golden Eaglets and Flying Eagles skipper was in action off the bench as the Azulgranas were promoted to the Spanish top-flight following a 3-0 rout of Numancia.
With table toppers heading into the final fixtures, Cadiz beaten 1-0 at home by Albacete, SD Huesca were crowned champions of La Liga 2 after a 1-0 victory at Sporting Gijon.
Manager Michel handed Nwakali his full debut against Sporting Gijon and he put in a solid 90-minute shift, 322 days after he joined the club on a permanent deal from Arsenal.
Writing on Instagram, the 2015 U17 World Cup winner said : "What a way to end the season Promotion to the Laliga:
Champion: First start : What a great God you are🥇🥇🥇🏆🏆🏆🏆🥇🥇🏆🏆".
Nwakali was a second half substitute in matches against CD Mirandés, Albacete, Racing Santander and Numancia.
Ifeanyi Emmanuel
Copyright ANS