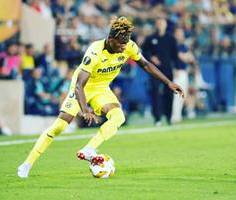 With a statement on their official website, Spanish La Liga side Villarreal have announced the hiring of former Arsenal coach Unai Emery as their new manager for the next three seasons.
Emery takes over from Javi Calleja who handed Nigeria international Samuel Chukwueze his professional debut in a Europa League group match against Glasgow Rangers in September 2018.
Chukwueze made 71 appearances for the Yellow Submarine under the tutelage of Calleja and was named in the starting lineup on forty-two occasions, during which he scored 10 goals.
Emery will be presented to the media in a press conference which will hold at the Estadio de la Cerámica on Monday, starting from 1230 hours.
The 48-year-old is a Europa League specialist, winning the competition with Sevilla in 2014, 2015 and 2016, before guiding Arsenal to the final last year.
Chukwueze is set to play in the Europa League next season after the Yellow Submarine finished fifth in La Liga in the recently concluded season.
Igho Kingsley
Copyright ANS