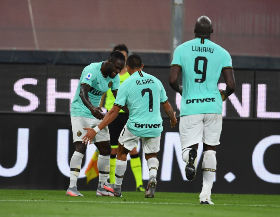 Antonio Conte's Inter Milan have closed the gap on Serie A leaders Juventus to four points following a comfortable 3-0 win against Genoa at the Stadio Comunale Luigi Ferraris on Saturday evening, allnigeriasoccer.com reports.
Chelsea loanee Victor Moses made his first start for the Nerazzurri in seven matches and put in an impressive 83 minutes shift before making way for Antonio Candreva.
The former Nigeria international has become a specialist in assisting goals since joining Inter Milan, averaging one every two league games, and he continued his fine form by setting up the goal scored by Manchester United loanee Alexis Sanchez in the 82nd minute.
Moses laid the ball on a plate for the Chile striker who volleyed home and Inter were 2-0 up, taking his total assists this season to six in the league - five for Inter Milan and one for Fenerbahce.
He has equaled his personal best for assists in a single season, which he first set during the 2011-12 season at Wigan Athletic, according to stats provided by Transfermarkt.
The 2013 Africa Cup of Nations winner is in line to beat his own record before the season ends, with Inter still having two games to play in the Serie A and they are also competing in the Europa League next month.
Ifeanyi Emmanuel
Photo Credit : inter.it
Copyright ANS