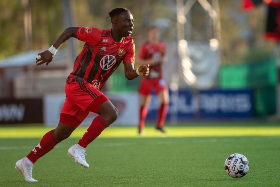 According to information gathered by allnigeriasoccer.com, highly coveted young striker Jordan Attah Kadiri has made a decision on his next career step.
After weeks of negotiations, Belgian First Division B team Lommel SK have reached a club-to-club agreement with Ostersunds FK for the transfer of the 2000-born player.
Having agreed personal terms with Lommel SK, Kadiri is expected to append his signature to a four-year contract upon his arrival in Belgium and will choose a jersey number for the upcoming season after a routine medical.
That medical has been scheduled to hold sometime this week as Lommel have asked him to send his details so an airline ticket can be emailed to him later today.
Ostersunds FK manager Amir Azrafshan has just announced his matchday squad for this evening's clash against Helsingborg and even though the transfer of Kadiri to Lommel is imminent, the Nigerian has been included in the starting line-up - in what is potentially his last game in an OFK shirt.
Some Belgian and Danish clubs were interested in signing Kadiri but he couldn't say no to Lommel simply because they are owned by City Football Group.
Ifeanyi Emmanuel
All rights reserved. This material, and other digital content on this website, may not be reproduced, published, rewritten or redistributed in whole or in part without prior express written permission from allnigeriasoccer.com