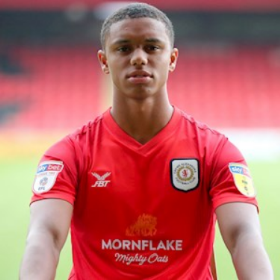 Allnigeriasoccer.com can exclusively report that London-born Nigerian teenager Rio Adebisi has ended speculation about his future by inking a new contract with League One new boys Crewe Alexandra.
The Railwaymen are poised to announce that the promising defender has committed his future to the club after he signed a new deal on Monday.
The left-back cum left wing-back was among the players retained by Crewe Alexandra following a successful campaign that saw them earn promotion to the third-tier of English football, but he would have departed the club as a free agent if he had not accepted the new deal he was offered at the end of the 2019-2020 season.
Adebisi is now tied to Crewe Alexandra until June 30, 2022, having put pen to a paper on a two-year deal, with the club having the option of a further two-year extension.
Last season, he totaled five appearances for the Railwaymen in all competitions, including two in the League Two.
Born to an English mother and Nigerian father, Adebisi has committed his international future to the three-time African champions and is open to representing the Flying Eagles.
Ifeanyi Emmanuel
Copyright ANS