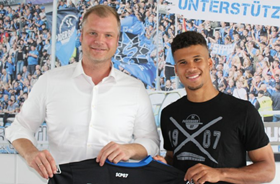 Demoted German Bundesliga club SC Paderborn have announced the signing of Chima Okoroji.
The 23-year-old fullback has joined SC Paderborn on a season-long loan from SC Freiburg, where he has spent the last two years of his career.
Born in Germany to an English mother and Nigerian father, Okoroji was called up to a Nigeria U23 training camp in December 2014.
Prior to his move to SC Freiburg, he represented the youth teams of Bayern Munich (2004-2014) and FC Augsburg (2015-2016).
In his first words as a player of SC Paderborn, Okoroji told the club's official website : "I have had numerous conversations with interested clubs.
"The SC Paderborn 07 took great care of me, the concept of the club absolutely convinced me. That's why I chose Paderborn".
For the upcoming 2020-2021 season, Okoroji, who spent time on loan at Jahn Regensburg last term, has been allocated the number 36 jersey.
He links up with Super Eagles left-back Jamilu Collins at SC Paderborn.
Igho Kingsley
Photo Credit : scp07.de
Copyright ANS