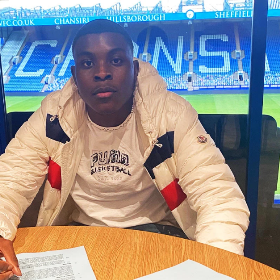 Championship club Sheffield Wednesday have officially announced the signing of Nigerian box-to-box midfielder Fisayo Dele-Bashiru on undisclosed terms.
The former Flying Eagles invitee has ended an eleven-year association with Manchester City following his move to Hillsborough from the Etihad.
Dele-Bashiru's aim in the upcoming season is to force his way into Sheffield Wednesday's first team.
In his first words after the deal was confirmed, Dele-Bashiru told swfc.co.uk : "I’m honoured to sign for Sheffield Wednesday and I’m excited to be here.

"I’m at an age now where I want to be playing first team football and I am confident it will fall into place for me here.

"I know there are other players in the same position but competition for places is a positive.

"My game is about power, strength and pace, I like to go box to box and I like taking on a shot too.

"The manager has shown a desire to bring me to the club and that means a lot. He has a good CV and I’m sure this is the right platform for me at this stage of my career."
Though Sheffield Wednesday have not disclosed the duration of contract signed by Dele-Bashiru, allnigeriasoccer.com understands it is for three seasons.
Igho Kingsley
Photo Credit : swfc.co.uk