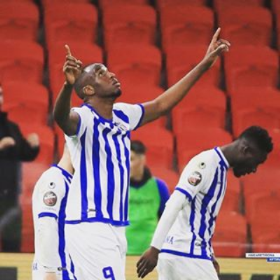 Former Liverpool striker Michael Ngoo extended his lead as the top Nigerian goal contributor in the whole of Europe (top-tier only) when he got on the scoresheet for Albanian Superliga champions KF Tirana as they were held to a 1-1 draw by Bylis on the final day of the season on Wednesday evening, allnigeriasoccer.com reports.
The London-born center forward opened the scoring for the Ndubuisi Egbo-coached team in the 22nd minute of the contest.
In doing so, Ngoo took his tally in the league to 13 goals from 30 appearances and he has 14 assists to his name, making him the most decisive Nigerian player in the 2019-2020 season.
Before Ngoo's brace against Skenderbeu Korce on June 28, Partizan Belgrade striker Sadiq Umar was the Nigerian player with the most goals and assists combined in the European Leagues this term.
The 27-year-old, who has caps for England's youth teams, is being courted by clubs in Poland, Turkey, Israel and United Arab Emirates on the back of his outstanding season with KF Tirana.
Sunday's Albanian Cup final against Teuta Durres would be his last game in the colours of Tirana if he doesn't extend his contract before the start of next season.
Ifeanyi Emmanuel
Copyright ANS