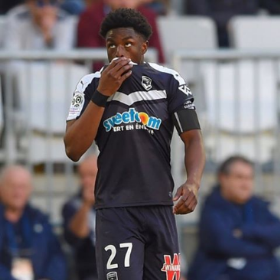 West Ham coach David Moyes is eyeing a reunion with his former pupil, Bordeaux striker Josh Maja in the summer, according to reports.
Sky Sports says West Ham are interested in signing the Nigeria international in the summer transfer window.
Former Sunderland manager Moyes handed Maja his professional debut in a League Cup tie against Queens Park Rangers in September 2016, introducing him off the bench to replace compatriot Joel Asoro.
Scottish Premiership giants Glasgow Rangers are targeting a move for Maja as a replacement for Alfredo Morelos who has been heavily linked with a switch to Lille in France.
The 21-year-old could be returning to his country of birth one and a half years after departing Sunderland.
Last season, Bordeaux number 9 Maja netted 8 goals in 24 games across all competitions and was in action for 894 minutes.
His contract with the French Ligue 1 club runs out at the end of the 2022-2023 season.
Igho Kingsley
Photo Credit : instagram.com/joshmaja
Copyright ANS