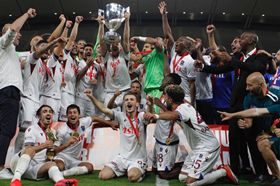 Eddie Newton has highlighted the difference between winning the Turkish Cup and the trophies he won during his time as assistant coach of Chelsea.
In only his second game as manager of Trabzonspor, Newton guided the team to beat Aytemiz Alanyaspor 2-0 on Wednesday evening thanks to goals from Abdulkadir Omur and Alexander Soerloth.
The Anglo-Nigerian football tactician was assistant coach of Chelsea when they won the UEFA Champions League and FA Cup in 2012.
Speaking at a press conference monitored by allnigeriasoccer.com after yesterday's game, Newton explained : "It was great to win a trophy, I was a bit fortunate enough to be assistant at clubs where we won things.
"Now this is my first one as the head coach so it is a little bit different. I thank everyone, everyone at Trabzonspor gave me fantastic support.

"The players were fantastic, they listened to everything that I wanted and they gave everything tonight.