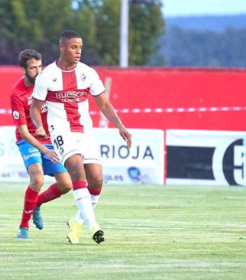 Flying Eagles-eligible attacker Kevin Carlos Omoruyi has committed his future to La Liga newcomers Sociedad Deportiva Huesca.
Through a press release published on their official website, SD Huesca have announced that the Spanish-born starlet has extended his collaboration with the club by putting pen to paper on a new contract until 2023.
In the recently concluded season, Omoruyi represented SD Huesca in the Alto Aragonese Youth of Honor, and was an important asset to the team, with seven goals in twenty-five starts.
The 19-year-old was called up to train with the first team on multiple occasions following the resumption of the league in the wake of the coronavirus pandemic.
Manager Míchel Sánchez included Omoruyi in the matchday squad in the last two games of the 2019-20 season, against CD Numancia and Real Sporting de Gijón.
He has played nonstop at SD Heusca since joining the club from Peñas Oscenses in 2016.
Ifeanyi Emmanuel
Copyright ANS