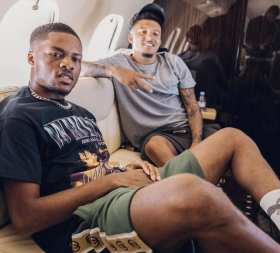 Arsenal Academy product Chuba Akpom has been spotted on a private jet with Borussia Dortmund young sensation Jadon Sancho, allnigeriasoccer.com reports.
It is unclear the date and time the pictures were taken amid speculation linking the two attack-minded players with an exit from their respective clubs in the summer transfer window.
PAOK Thessaloniki striker Akpom has been linked with a return to the Premier League with West Ham among his suitors, and the same goes for Sancho who is Manchester United's number one transfer target this summer and has also attracted interest from Liverpool and Chelsea.
Akpom and Sancho hanging out together shouldn't come as a surprise as they are both represented by the same Nigerian intermediary, Emeka Obasi's Elite Project Group Limited.
This month it came to light that Arsenal inserted a sell-on clause into the deal taking the former Super Eagles invitee to PAOK and they were fined by FIFA for not uploading the information to the Transfer Matching System.
Akpom was on the books of Arsenal for sixteen years and made 12 appearances in all competitions for the north London club before his exit.
Ifeanyi Emmanuel
Photo Credit : instagram.com