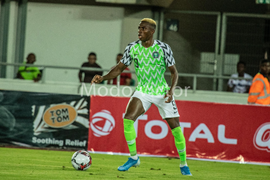 Napoli's all-time top scorer in history with 125 goals, Dries Mertens has explained how he would help Victor Osimhen adapt to life in the Italian Serie A.
Napoli are closing in on completing the signing of the Super Eagles striker for a Nigerian record transfer fee in the region of 50 million euros.
The 21-year-old had drawn attention from several clubs in the English Premier League and Spanish La Liga but it is all but confirmed that The Partenopei have won the race for his signature.
Osimhen earlier expressed concerns about the racism issues in Italy before he was convinced to join Napoli.
When asked by Napoli's 'official radio station Radio Kiss Kiss' how he would like to help a young player like Osimhen, Mertens responded : "Of course yes. We can also play together. Not knowing the language and the championship, will need some time, we must all be close to him".

If everything goes as expected, Osimhen will be tied to the Naples club until at least June 30, 2025, having agreed a five-year contract.
The 2015 U17 World Cup winner attracted interest from Italian super clubs Juventus and AC Milan in the past.
Ifeanyi Emmanuel
Copyright ANS