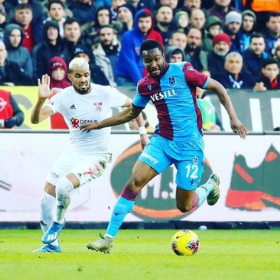 Former Chelsea midfielder John Obi Mikel has taken to social media to congratulate Trabzonspor on winning the 2020 Ziraat Turkish Cup after beating Aytemiz Alanyaspor 2-0 in the showpiece on Wednesday evening, allnigeriasoccer.com reports.
It was the first trophy won by the Black Sea Storm in ten years since winning the 2010 Turkish Super Cup and a coach of Nigerian descent in Eddie Newton made it possible.
Mikel has a past with Trabzonspor as he was their marquee signing last summer but had to end his association with the club in March 2020 over coronavirus fears.
The Super Eagles legend featured in three Turkish Cup games before bidding his farewell to Trabzonspor, against Altay SK and Denizlispor (2), logging 187 minutes.
Writing on Instagram, Mikel stated : " Congratulations trabzonspor on winning the cup final. Well done boys and the city deserve it.👏👏👏".
During his time at Stamford Bridge, Mikel was part of the Chelsea squads that won the FA Cup in 2007, 2009, 2010 and 2012.
Currently unemployed, the 33-year-old has been linked with possible moves to clubs based in Brazil, Italy and England in the summer transfer window.
Ifeanyi Emmanuel
Copyright ANS