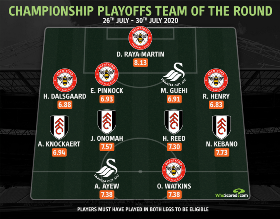 Nigeria-eligible midfielder Josh Onomah has been recognized for his outstanding performance in the EFL Championship playoff, with football statistics website Whoscored.com naming him to the Team of the Round, 26th - 30th July 2020,  allnigeriasoccer.com reports.
The Fulham star was named in a four-man midfield containing three of his teammates at Craven Cottage in the shape of Anthony Knockaert, Harrison Reed and Neeskens Kebano.
Fulham set up a meeting with Brentford in the playoff final, who saw off Swansea City in the semifinal, following their 3-2 win on aggregate against Cardiff City.
Of the eleven outstanding players included in the Team of the Round, only Brentford glovesman Raya Martin (8.13) and Kebano (7.73) rated higher than Onomah (7.57).
The 2017 England U20 World Cup-winning midfielder netted a crucial opener for Fulham as they registered a 2-0 win over The Bluebirds at the Cardiff City Stadium on July 27, before going the distance in their 2-1 loss to the Welsh outfit on Thursday evening.
In the first leg tie, Onomah made a joint game high 3 key passes, was the top dribbler with five take-ons, and was the second best interceptor with three.
And in the second leg yesterday, the former Tottenham Hotspur star completed a game-leading three dribbles, and had a joint team high three tackles.
Ifeanyi Emmanuel
Copyright ANS