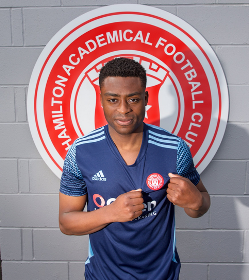 Scottish Premiership team Hamilton Academical officially confirmed the signings of two Nigerian players ahead of their opening game of the new season against the champions, Celtic on Sunday, August 2.
Highly-rated striker Tunde Owolabi has joined the Accies on a season-long loan from FC United of Manchester, for whom he scored 35 goals last term, making him the highest scoring player in the top seven divisions of English football.
The 24-year-old has been offered a contract by Hamilton Academical following a successful trial.
Tunde's father, Ganiyu Owolabi, was a professional footballer, turning out for Golden Babes, Okin Babes, Royal Antwerp, Viking FK and Al-Wasl among others.
Former Wolverhampton Wanderers and Tottenham Hotspur youth-teamer Hakeem Odoffin has been signed from fellow Premiership side Livingston for an undisclosed fee.
A defender by trade, the 22-year-old has put pen to paper on a contract that will keep him at the Accies until at least 2021.
For the upcoming season, Owolabi will wear the number 36 shirt, Odoffin 2, while Greek-Nigerian striker Marios Ogkmpoe has been allocated the number 9.
Igho Kingsley
Photo Credit : hamiltonacciesfc.co.uk
Copyright ANS