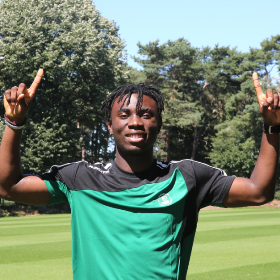 Through their official website, City Football Group-owned Belgian First Division B team Lommel SK have announced the acquisition of promising striker Jordan Attah Kadiri following a successful medical.
Lommel SK have pulled off a transfer coup by signing the Nigerian prospect from Ostersund in Sweden as he was heavily courted by teams in Belgium and Scandinavia before they won the race for his signature.
Kadiri has inked a four-year deal that will keep him at the Limburg club until June 30, 2024.
The 20-year-old was an outstanding performer for his past club Ostersund, scoring 9 goals in 24 matches and registered three assists.
He has made remarkable progress in his career as he was playing for Nasarawa United in the Nigerian Professional Football League just last year.
Nigerian strikers Jason Adesanya and Samson Iyede previously wore the colours of Lommel SK.
Ifeanyi Emmanuel
Copyright ANS