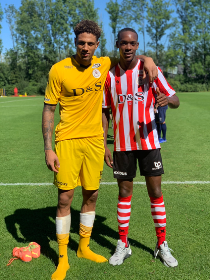 Nigeria international Maduka Okoye has made his debut for Sparta Rotterdam, eighteen days after his signing was confirmed by the Dutch Eredivisie club, allnigeriasoccer.com reports.
The former Fortuna Dusseldorf glovesman played the entirety of the second half as Sparta Rotterdam registered a 3-1 win over TOP Oss in a pre-season friendly on Friday, July 31.
Okoye and his teammates have been preparing for the new season since July 22 and they had trained at the Sparta Stadium for three days before heading for a training camp in Delden.
The rookie Super Eagles goalkeeper impressed in his first game for Sparta Rotterdam, as he didn't retrieve the ball from the back of his net throughout his duration on the pitch.
Giovanni Büttner opened the scoring for TOP Oss but Sparta leveled the score through a goal by Danzell Gravenberch before half-time.
In the 68th minute, young Nigeria-eligible striker Emmanuel Emegha chipped the ball over the goalkeeper to make it 2-1, before Jason Meerstadt got on the scoresheet.
Aged 17, Emegha, who has played a non-binding game for Netherlands U15s, scored 14 goals in 17 matches for Sparta Rotterdam's youth teams last season.
He signed his first professional contract with Sparta, a three-year deal, in March 2020.
Ifeanyi Emmanuel
Photo Credit : twitter.com/OkoyeMaduka
Copyright ANS