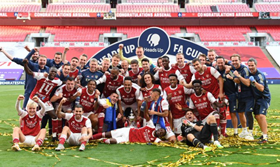 Arsenal beat Chelsea for the third time in the final of an FA Cup on Saturday evening to win the competition for the fourteenth time in their history, a record-extending feat achieved by Mikel Arteta's side.
Despite going a goal behind inside five minutes, the Gunners showed character and put in a disciplined performance to claim the trophy and qualify for the group stage of next season's Europa League.
Chelsea started much the brighter side and took the lead through Christian Pulisic; the American executing a stylish finish after a clever backheel from Olivier Giroud.
Pierre-Emerick Aubameyang was brought down in the box by Cesar Azpilicueta and referee Anthony Taylor pointed to spot in the 28th minute.
From the resultant penalty, the Gabonese brought Arsenal back on level terms with a composed finish, before netting what proved to be the game-winning goal midway through the second half.
Nigerian starlet Bukayo Saka who can play everywhere on the left wing was an non-playing substitute, with manager Arteta picking Kieran Tierney, Ainsley Maitland-Niles and Aubameyang as the starting left sided defender, left wing-back and left winger respectively.
In the build-up to the FA Cup final shown live by Super Sport, Arsenal's longest serving player on a first team contract, Argentine goalkeeper Emiliano Martinez was asked to give the lowdown on the first team players.
On Saka, Martinez said : "Bukayo Saka is a guy who listens and that's something encouragable.
"He's already played 25, 30 games this season. The way he listens, the way he trains are top for him".
The 18-year-old Saka was involved in the first four matches played by the Gunners in this season's FA Cup but was an unused substitute against Manchester City and Chelsea in the semifinal and final respectively at Wembley.
Ifeanyi Emmanuel
Photo Credit : arsenal.com
Copyright ANS