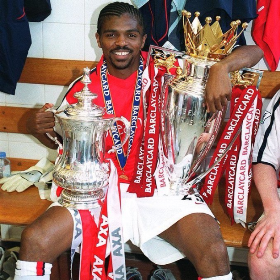 Nwankwo Kanu has congratulated Arsenal on winning the FA Cup for the fourteenth time in their history, after beating Chelsea 2-1 at Wembley Stadium on Saturday evening.
Kanu is one of Africa's most successful players in FA Cup history, winning the trophy on three different occasions - 2002 and 2003 with Arsenal and 2008 with Portsmouth.
When it comes to Nigerian players, only Chelsea legend John Obi Mikel has won more FA Cup trophies than Kanu, with the former Super Eagles midfielder getting his hands on the trophy in 2007, 2009, 2010 and 2012.
Kanu scored the winner as Portsmouth defeated Cardiff City in the 2008 final and won the Man of the Match accolade.
The Gunners victory against Chelsea was made even more special as the retired Nigeria international, who spent five years at the north London club, celebrated his 44th birthday on Saturday.
"Thank you for my birthday 🎂 present 🏆@arsenal #coyg #facup #champion, " Kanu posted on Instagram.
For the 2002 FA Cup final, Kanu played the last nine minutes vs Chelsea, and the following year he was an unused sub in the win against Southampton.
Ifeanyi Emmanuel
Copyright ANS