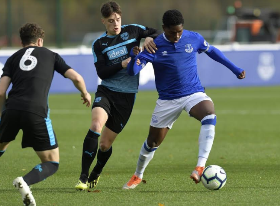 Allnigeriasoccer.com understands that four clubs that competed in the EFL Championship are mulling over a move for former Flying Eagles invitee Korede Adedoyin.


The Nigerian-born winger is set to join a new club this summer after he was released by Everton following the expiration of his contract.
Newly promoted Premier League club West Brom are mulling over a move for Adedoyin and there's also interest from Stoke City, Sheffield Wednesday and Birmingham City.

The 19-year-old's agent has held transfer talks with foreign clubs based in Austria, Italy and Germany over a potential move.


He has been keeping fit by training with an unnamed Championship club after parting company with The Toffees.
Adedoyin, who has been likened to Crystal Palace star Wilfried Zaha due to his playing style, was on the books of Everton for nine years and netted an impressive 24 goals in 47 appearances in the U18 Premier League during his time with the club.
He signed his first professional contract in July 2019, before he was loaned out to Scottish Premiership side Hamilton Academical for the first half of last season.
Ifeanyi Emmanuel
Copyright ANS