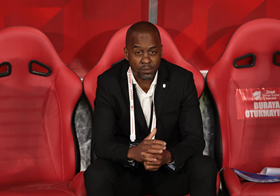 Former Chelsea assistant coach of Nigerian descent, Eddie Newton has been appointed permanent coach of Turkish Super Lig side Trabzonspor and this is official.
The legendary Blues midfielder has been given the permanent job after he guided Trabzonspor to win the Turkish Cup in only his second game as caretaker boss after the club mutually agreed to part company with Huseyin Cimsir.
Newton was appointed assistant coach of Trabzonspor in February 2020 after spending eight years as a Chelsea coach.
"Our Board of Directors has taken the decision to continue as the Coach in the new season with Eddie Newton, who is a coach in our A team.
"We wish Newton success in his post," Trabzonspor said in a press release published on their official website.
Since 2003, Newton has been married to Zeliha Kılıc Newton, who is of Turkish origin and has a Swedish passport.
The 48-year-old represented Chelsea teams for 14 years and is famous for scoring in the 1997 FA Cup final vs Middlesbrough.
Igho Kingsley
Photo Credit : trabzonspor.org.tr